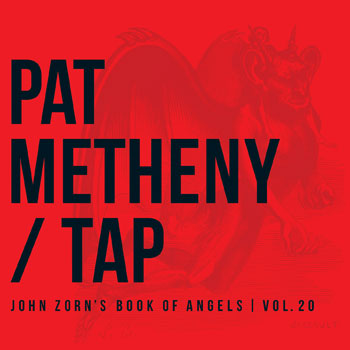 Pat Metheny adds his contribution to John Zorn’s ambitiously expansive Masada Book Two with Tap: The Book of Angels, Volume 20. This album is the first collaboration between the two artists, considered among their generation’s most innovative musicians. Besides his frequent collaborator, drummer Antonio Sanchez, Metheny plays all other instruments—guitars, sitar, tiples, bass, keyboards, orchestrionics, electronics, bandoneón, percussion, flugelhorn, and more—himself.

Beginning in the 1990s, Zorn wrote 500 songs inspired by traditional Jewish music; they came to be known as two volumes of the Masada Book. He performed the first 200 songs of Book One with the rotating members of the Masada ensemble for a decade before writing Book Two’s 300 tunes in just three months. Over the past eight years, the songs from Book Two have been recorded as volumes of The Book of Angels by a stellar group of musicians, including the Masada Quintet, Masada String Trio, Medeski Martin & Wood, and Marc Ribot.

Zorn says of Metheny’s recording, “Pat is of course a living legend—one of those rare lights in the universe. His incredible facility and dedication, indefatigable energy and focus, imagination, and never-ending curiosity have distinguished him as truly one of the greatest musicians on the planet.” He continues, “Tap is a showcase for Pat’s remarkable imagination, technique, passion, and love for the world. No matter how many times I listen to this recording I am hit with that same sense of exhilaration that hit me the very first time.”

Metheny, who recently won his 20th Grammy Award, adds, “I have admired John Zorn since the late ’70s and have followed his amazing output every step of the way. A few years ago, after contacting me to write some notes for one of his Arcana publications, John and I began an inspired e-mail connection. (As hard as it is to believe, we had never met in person over the years.) I mentioned that I had followed his Book of Angels series from the start and felt like I might be able to contribute something unique to the collection. With his enthusiastic encouragement, he gave me some suggestions as to which tunes were still unrecorded, and I picked the ones that jumped out and spoke to me. Over the next year, in between breaks from the road, I recorded them one by one in my home studio whenever I got a chance.”