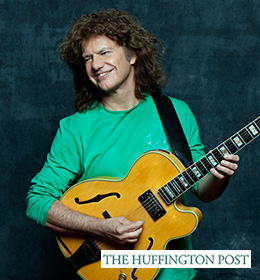 Excerpt from “A Conversation with Pat Metheny”

MR: Do you feel like this unity has brought out nuances in or aspects of everybody’s playing that haven’t come out before?

PM: I think it’s a very different kind of record for me. It does have some connections to other things that I’ve done, and I would say for the other guys, that’s maybe even a little bit more true. I think that’s part of the attraction for them, too, for wanting to do this. It’s very different than playing “Autumn Leaves” with a bunch of guys down in a club in lower Manhattan somewhere. As much as we all kind of come from that and would love to do that, a big part of my mission has been to say, “Yeah, but.” That is at the core of everything that I do as a musician, that particular language and the way that language has evolved over the last seventy or eighty years in this music. But I feel like it’s a very important part of our job, and my job as a musician and band leader to sort of push things and try to get to things that are new—a different part of the language that hasn’t been explored as much and to try to again reconcile all of the different things that I love about music under one roof. This band is particularly well equipped to do that.